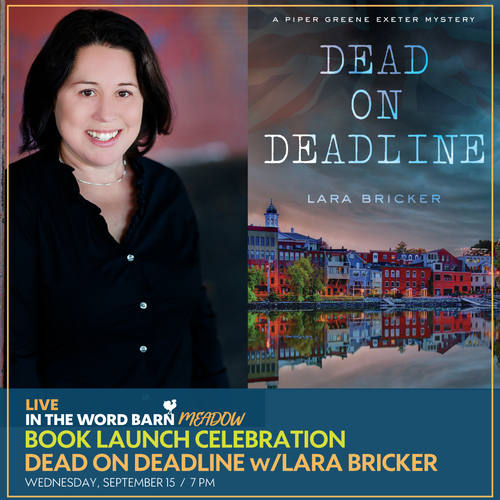 Join us for Lara Bricker's book launch event at The Word Barn Meadow on Wednesday, Sept. 15th at 7pm! Registration is required.

Tickets are donation-based ($5/person suggestion), with the ability to include a copy of Dead on Deadline book available for pick up at the event thanks to Water Street Bookstore. Registration required due to Covid-capacity limitations.

“A new cozy mystery series set in a quaint New England town with a quirky cast of characters, historical tidbits and a newspaper reporter who always finds herself in the middle of murders.”

Just as her journalism career in the city is taking off, Piper Greene returns to her tiny New England hometown to care for her beloved aunt, Gladys. She takes a job at the Exeter Independent, where her days are filled with stories of church bazaars, runaway turkeys, and news from the garden club.

Piper assumes her assignment to cover the American Independence Festival, honoring her town’s role in the Revolutionary War, is just another mundane event. But when a body dressed in a Red Coat soldier jacket is found hung from the top of the historic Town Hall, Piper finds herself in the middle of a murder. The victim is her news editor, Charlotte Campbell, and there is no shortage of people who would be glad to see her dead.

Suspicion quickly lands on the paper’s photographer, who was fired the day before, but Piper cannot believe he is capable of murder. With the help of her high school crush, now a detective, her best friend at the bakery, and the town historian, Piper sets out to prove her friend’s innocence. But as she persists, she learns that unearthing small-town secrets is harder than she thought—and that some parts of local history can be deadly.

Lara Bricker is an award-winning journalist, podcaster, former private investigator, certified cat detective and true crime author. She is one of four crime writers on the hit podcast, Crime Writers On and the author of the true crime book Lie after Lie: The True Story of a Master of Deception, Betrayal, and Murder.

She is a longtime Exeter resident and has been writing and reporting on crime and justice issues since 1998. Her work has appeared in the Portsmouth Herald, the Exeter News-Letter, the Hampton Union, the New Hampshire Union Leader, Woman’s World magazine, USA Today, and the Boston Globe. In 2008, she covered the first death penalty case to go to trial in New Hampshire in almost fifty years for the Associated Press.