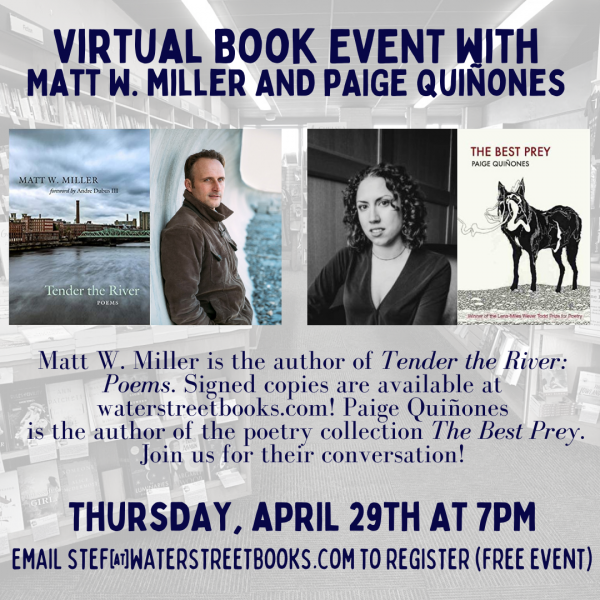 Email stef@waterstreetbooks.com to register for this free event!

Focusing on the Merrimack River, the book weaves historical, geological, social, and personal narratives together, from the last ice age, to the indigenous tribes that settled there and before driven off by Europeans, to the birth of the industrial age and the urban decline and rebirth of the late 20th century. It hopes to be a celebratory and critical look at the relationship between the various human worlds as well as the natural world they occupy and give readers a sense of the bigger story we are all a part of by using this one small scratch of the earth as an example.

Praise for Tender the River:
Matt W. Miller's Tender the River is a powerful, endlessly compelling book. You will find many things here, poems of transformation, poems of childhood, beautiful songs and spell-binding narratives. But what moved me most is the way Miller speaks about his country, its history, its anger and guilt. Argument with someone else is a rhetoric, argument with yourself is poetry, Yeats taught. Miller knows this crucial lesson. His poetics of Americana gives us a reckoning and also a knowledge that more reckoning is to come. He looks at the myth of American history and asks: what is real, and is anything real in the late empire? His answers are lyric, honest self-questioning. And, what is more: he does this not via flat proclamations but via music, via skillful storytelling, via vivid, sensual, memorable speech. This is an important book.

MATT W. MILLER grew up in Lowell, Massachusetts and is the author of the poetry collections The Wounded for the Water (Salmon Poetry), Club Icarus, selected by Major Jackson as the winner of the 2012 Vassar Miller Poetry Prize and Cameo Diner: Poems. A former Wallace Stegner Fellow in Poetry at Stanford University and a Walter E. Dakin Fellow in Poetry at the Sewanee Writers' Conference, he teaches English at Phillips Exeter Academy and lives with his family in coastal New Hampshire.

Paige Quiñones's incisive debut poetry collection investigates the trauma of desire. Quiñones's lyric world is populated with stark dualities: procreation and childlessness, predator and prey, mania and depression. A hunter pursues an ill-fated fox through the woods; heaven is paved with girls who would rather drown than be born; a couple returns from their honeymoon to find a stagnant pond in their marriage bed. Through navigating these duplicities, Quiñones arrives at a version of femininity that is at once fierce and crystalline, and unmistakably her own. She writes, "My reflection can only growl back, in water or oil-slick or silver. This is an exercise in forgiveness. I dip my feet in." The Best Prey charts the complexity of hunger in vivid, visceral terms, and ultimately arrives at a sense of self that encompasses the contradictions of sensuality, violence, and power.

Paige Quiñones has received awards and fellowships from the Center for Mexican-American Studies, the Academy of American Poets, and Inprint Houston. Her work has appeared in Copper Nickel, Crazyhorse, Juked, Lambda Literary, Orion Magazine, Poetry Northwest, Quarterly West, Sixth Finch, and elsewhere. She earned her MFA from Ohio State University and is currently a PhD student in poetry at the University of Houston.