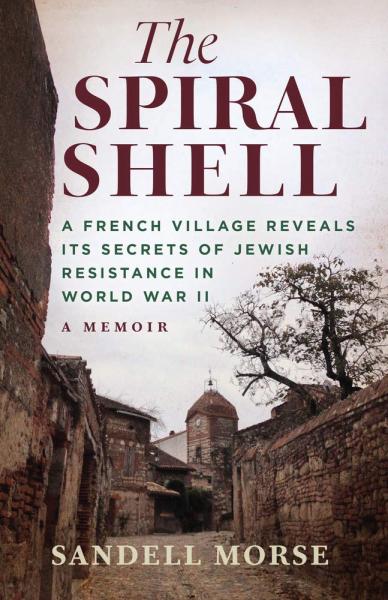 Join us for a fascinating conversation between Sandell Morse, author of The Spiral Shell: A French Village Reveals Its Secrets of Jewish Resistance in World War II, and L. Annette Binder, author of  the historical novel The Vanishing Sky!

In this haunting memoir that reflects on the Holocaust and its legacy, award-winning author Sandell Morse discovers stories of bravery and resistance enacted during WWII in southern France. In the course of six years at a writing residency in France, during which she met with survivors and historians, she painstakingly pieces together the puzzle that had been beguiling her over the years: what was the real story of the French Jews under the Vichy government during the Second World War?

Driven by her dogged curiosity and determination to uncover the truth, and with a fossilized shell she'd found in the wall of the Jewish quarter in Paris as a talisman, she seeks deeper meaning and understanding of her own Jewish heritage.

By gradually gaining the trust of those she interviewed, Sandell reconstructs incidents of the civilians' extraordinary courage in resisting the Vichy regime and Nazi occupation.

From the survivors' harrowing tales of escape, ingenious subterfuge, and just plain luck, she learns of a nunnery that was a safe-house for refugees; a rabbi who gave his life to save hundreds of Jewish children; the local gendarme who, endangering his own life, tipped the Resistance off to the upcoming Nazi roundups.

In this year that marks the 80th anniversary of the deportation of thousands of French Jews to Auschwitz, this memoir reflects on a crucial time in our world's history that still reverberates today and provides a moving tribute to those who resisted oppression and fascism.

Sandell Morse is a non-fiction writer whose works have appeared in several major literary magazines, including, Ascent, Ploughshares, and Solstice. She has received Notable Mention in Best American Essays 2013, and a nomination for the Pushcart Prize and Best of The Net. She lives in Portsmouth, New Hampshire.

L. Annette Binder was born in Germany and immigrated to the U.S. as a small child. She holds degrees in classics and law from Harvard, an MA in comparative literature from the University of California at Berkeley, and an MFA from the Program in Writing at the University of California, Irvine. Her short fiction collection Rise received the Mary McCarthy Prize in Short Fiction. She lives in New Hampshire. The Vanishing Sky is a World War II novel as seen through a German lens, a story of the irreparable damage of war on the home front, and one family's participation-involuntary, unseen, or direct-in a dangerous regime. Drawing inspiration from her own father's time in the Hitler Youth, L. Annette Binder has crafted a spellbinding novel about the choices we make for country and for family.