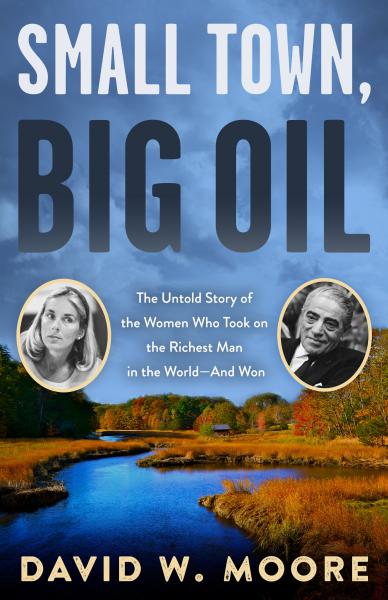 In the fall of 1973, the Greek oil shipping magnate Aristotle Onassis, husband of President John F. Kennedy's widow, Jacqueline Kennedy Onassis, and arguably the richest man in the world, proposed to build an oil refinery on the narrow New Hampshire coast, in the town of Durham. At the time, it would have cost $600 million to build and was expected to generate 400,000 barrels of oil per day, making it the largest oil refinery in the world. The project was vigorously supported by the governor, Meldrim Thomson, and by William Loeb, the notorious publisher of the only statewide newspaper, the Manchester Union Leader.

But three women vehemently opposed the project--Nancy Sandberg, the town leader who founded and headed Save Our Shores; Dudley Dudley, the freshman state rep who took the fight to the state legislature; and Phyllis Bennett, the publisher of the local newspaper that alerted the public to Onassis' secret acquisition of the land. Small Town, Big Oil is the story of how the residents of Durham, led by these three women, out-organized, out-witted, and out-maneuvered the governor, the media, and the Onassis cartel to hand the powerful Greek billionaire the most humiliating defeat of his business career, and spare the New Hampshire seacoast from becoming an industrial wasteland.

David W. Moore is an award-winning author, and currently a Senior Fellow at the Carsey Center for Public Policy at the University of New Hampshire. He is also the polling director and frequent columnist for iMediaEthics.org, for which he won the 2015 EPPY Award for his news/political commentary. For twenty-one years (1972-1993), he taught political science at the University of New Hampshire, and for the next thirteen years he worked at the Gallup Organization as a senior editor of the Gallup Poll. He became affiliated with UNH again in 2008. He is the author of three non-fiction trade books, and the co-author of one cross-over trade/academic book: The First Primary: New Hampshire's Outsize Role in Presidential Nominations, with Andrew E. Smith (University Press of New England, 2015); The Opinion Makers: An Insider Exposes the Truth Behind the Polls (Beacon Press, hardback, 2008; revised edition in paperback 2009); How To Steal An Election: The Inside Story of How George Bush's Brother and Fox Network Miscalled the 2000 Election and Changed the Course of History (Nation Books, 2006); andThe Super Pollsters: How They Measure and Manipulate Public Opinion in America (Four Walls Eight Windows, 1992; trade paperback 1995). He has published essays and articles in The New York Times, The Nation, The Boston Globe, Public Opinion Quarterly, New York Newsday, Public Perspectives, and numerous other books and journals.

Small Town, Big Oil: The Untold Story of the Women Who Took on the Richest Man in the World--And Won (Paperback)